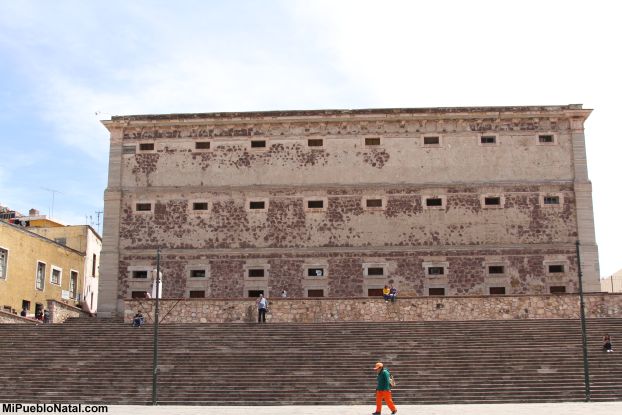 
While finding our way around the city of Guanajuato, my wife walked into a pink shop located in one of the corner buildings. I did not want to go in there with her and decided to snap some pictures. While she entered, I took a picture of her and the old building can be seen while she walks in. At this point, I did not know a think about the building. I hadn't even heard its name!

My wife can be seen already inside the shop and the Alhóndiga de Granaditas building can be seen on the far right. 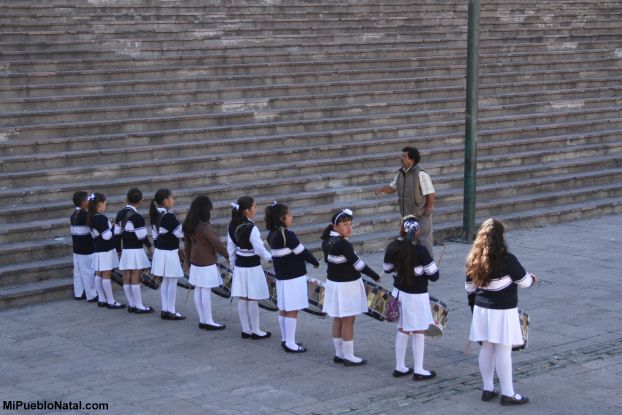 Young girls during early morning band practice in front of the building.

It turns out this is one of the most famous and historic buildings in the city of Guanajuato! This is where one of the early battles of the Mexican War of Independence occurred on September 16, 1810.

"The Alhóndiga de Granaditas is a historical building, monument and regional history and art museum built between 1798 and 1809. Alhondiga means 'grain storehouse or market', and the building originally housed a large grain and seed storehouse, or granary."

I looked at the old building no knowing what to make of it and not realizing I was standing on something so rich with history. I hung around for a while and took some pictures of the town from the building. While I walked, I noticed a young lady sitting in front of the building; drawing a picture of it. 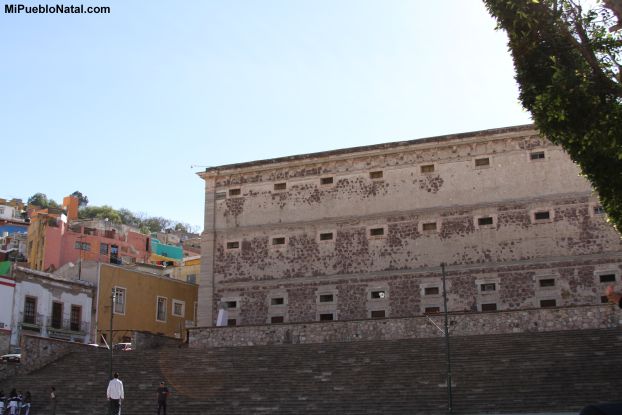 Picture taken from one of the corners below. 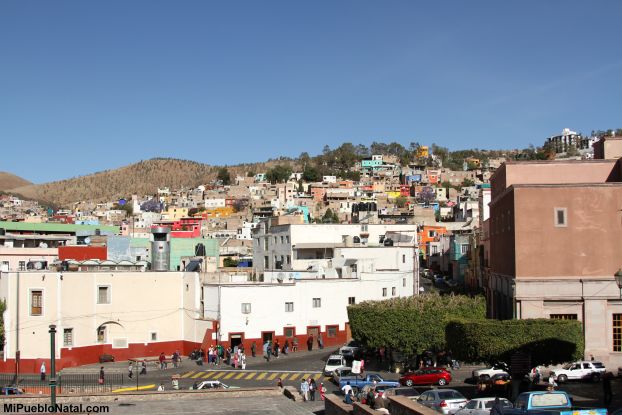 Corner shop called "La Esquina" behind the rounded trees. Yes, my wife is still in there; shopping! 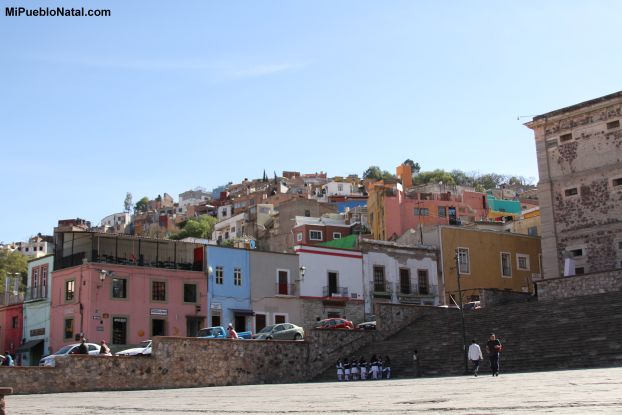 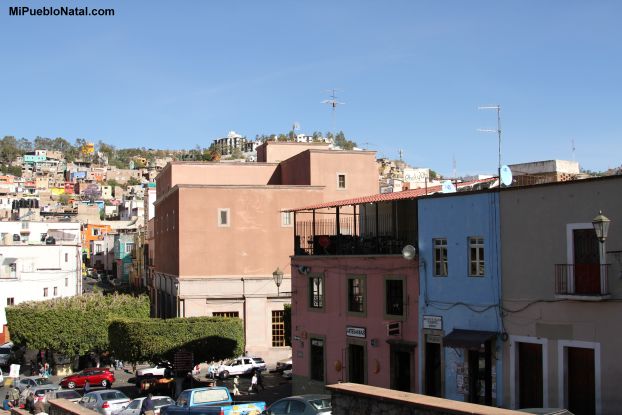 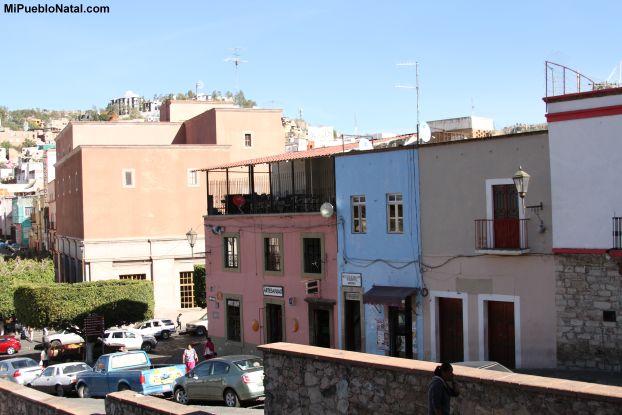 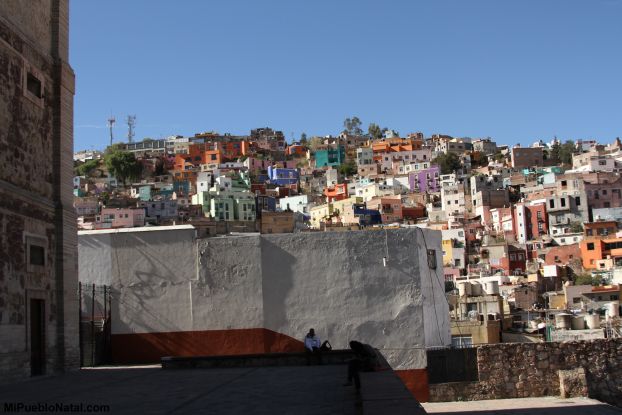 Side view of the city of Guanajuato - Picture taken from the front of the building. 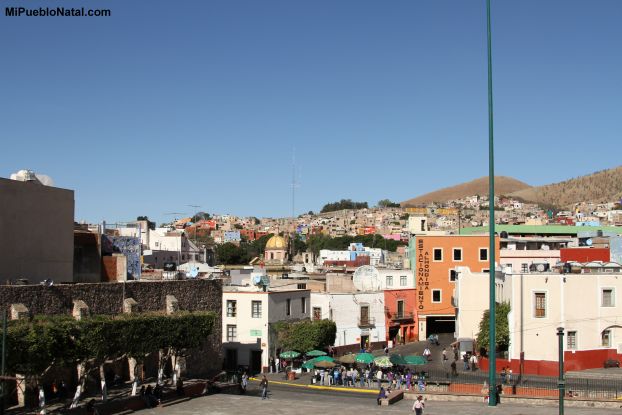 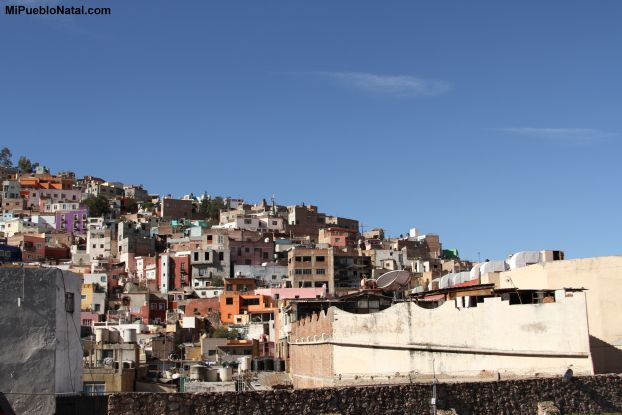 These are other pictures taken from Alhóndiga de Granaditas 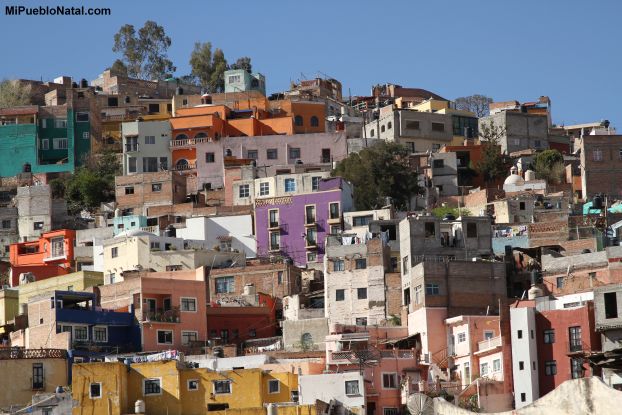 The Alhóndiga measures 72 by 68 meters, with a height of 23 meters, and occupies an area of 4,828 square meters. It is constructed on the side of a hill and two of its sides are surrounded by elevations, a consequence of the odd geography in the city. There are no ornamental facets on the exterior, except for a few windows at the top of each storage room. It has cornices built in a Donic style, constructed with two types of regional stone—reddish and greenish. This gives it a curious appearance, resembling a stronghold or a castle, which it has come to be called by the people of Guanajuato. In the interior, there is a porch that leads to a spacious central patio. The porch contains Tuscan columns and adornments. There are two staircases that lead to the upper floor. The Alhóndiga has only two access doors, a small one facing the east, adorned by two columns, and a large door of the same basic style, facing the north. Prior to the Mexican Independence from Spain, the building was used as a warehouse, military barracks, and prison. Currently it serves as a regional museum. 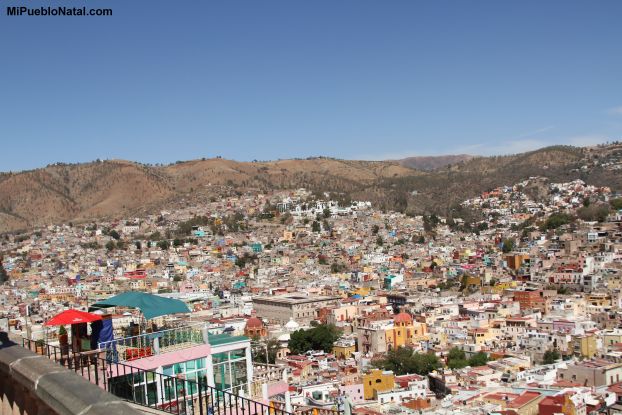 Alhondiga de Granaditas building can be seen in front of the blue tarp. 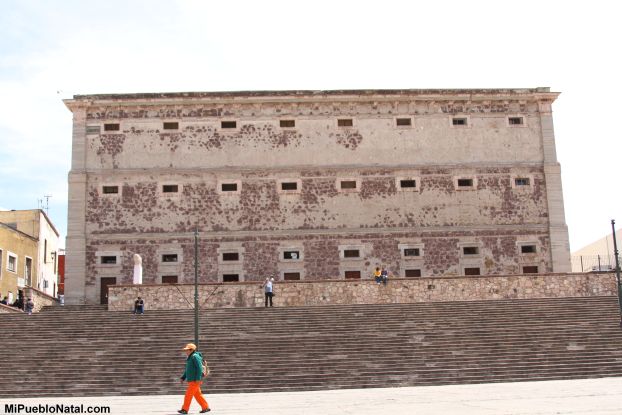 This last picture is not the same as the first one. Please use the walking person in orange pants as reference.

Return from Alhondiga de Granaditas to the City of Guanajuato